Chicken, Bear and Dave were playing, when Bear jumped heavily and the ice broke off from the mainland. Chicken and Bear floated away with it, leaving Dave behind. Dave was trying everything to get them back. He told Bear to grab the rope that he threw, but it wasn’t strong enough and it snapped, making Dave and Bear fall over. Dave had another idea to make a bridge out of ice so he grabbed his tools and started building. A few hours later it was ready, so he laid it down and Bear and Chicken crawled over to safety. Soon they were playing happily together again.

What a nice story of friendship and collaboration! Well done!

I can see by your story you know how to capture the interest of your readers. Keeping the prompt photo in mind, you shared what had happened and a solution allowing the friends to be back together in safety. Well done. 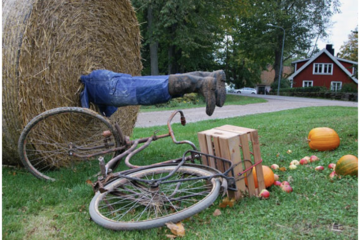