The Purple Elephant, By LIAM, Year 4.

News just in! Archeologists have found bones from a new species of purple elephant that has never been discovered before. The bones are estimated to be 200,000 years old and were located in the Australian High Country.

The scientists know that the elephant was purple because of its purple bones. The elephant was 17.5 metres high and the ribs alone would fit one baby Blue Whale within them. The fossil was found at the bottom of the sea bed. The bones were being fed on by giant fossilised seahorses. According to scientists, the elephant ate avocados and other plants. There is a public competition to name this elephant.

wow, it’s better than mine…

Prompt words : giraffe, sang, dusty, pink, painful I wore my favourite dusty pink lipstick while I sang at Indigo Park. Singing there was so crazy. As I was singing, a giraffe and an elephant Read more…

Prompt: giraffe, sang, pink, painful, dusty. I sang as loud as a giraffe at choir. My ears were painful and pink because I was bursting with laughter. I walked out of the station. It was Read more… 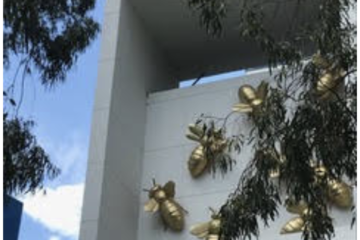